On our way to Everest base camp EBC, we crossed a pass named Dzongh La. This is a very iconic and emotional place. 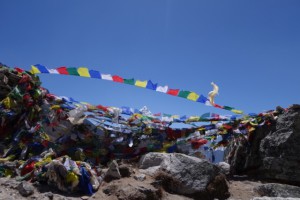 It is a memorial site for Sherpa and western climbers who died on Everest. As soon as I passed under the flags which mark the pass and entry to the site, I got caught by an intense emotion which hit me instantaneously. I could neither escape from it nor ignore it. It was omnipresent and I felt a cold creeping into my body. This was the cold of death and mortality. 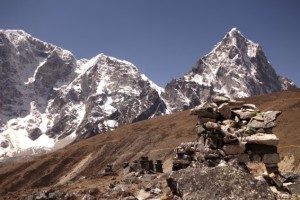 Seeing the memorials almost immediately made aware the overall danger of my endeavour to climb Everest. I walked across the area reading the inscriptions of the tombstones. And each of them was a climber who came to Everest with the same mindset, courage and determination as I do. This changed the character of the site from a memorial to a big warning site. I reflected why I am here, what my responsibilities toward my family and friends are and weather or not it is legitimate to do. Thousands of thoughts hammered through my brain and soul. Which decision is the right one? And then the letter my daughter wrote to me before I left kicked in. Her letter is the utmost responsibility to me to remember what my „real summit“ is: to return to her and my partner who has a hard time now and yet supports me in an unbelievable way which takes a lot of courage. Dozens of options to balance.

By far the most prominent memorial is for Scott Fisher, an American climber who died in the tragedy 1996. Guiding his team on Everest, he reached the summit too late and was caught in a raging storm that engulfed the mountain. With him died another nine climbers. The lessons learned from his death are invaluable in as much safety while climbing has increased tremendously. 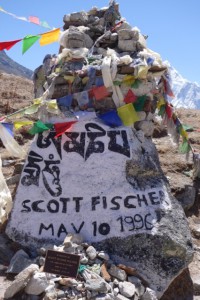 Adventures start outside our comfort zone. They have a life of their own which we cannot stop or manipulate. We must acknowledge the inherent risks. And our responsibilities.