The snow was wet and heavy under foot. It creaked and groaned under our crampons. It had been snowing continuously for the last three days and the storm showed no signs of relenting. We had left our camp at Tashi Lapcha as the snow was threatening to overwhelm us. Our provisions were running out. Descent was the only answer – an almost fatal one.

Snow and ice, whose sheer beauty had, but a few days previously, held me under their spell, were now my bitter enemies on this forced descent.

Sherpas and climbers traversed the treacherous slope beneath one another. I could sense something, making me feel nervous. As I turned around to tell my teammate, it happened.

Above us, a horizontal layer of snow came away and I immediately yelled: “Avalanche, damn it, Avalanche!!!”.

We were instantly swept away like toy soldiers by the mass of snow, tiny puzzle pieces at the mercy of a mighty force that allowed us no chance of defence. We had to submit to her will. Helpless.

I tumbled here and there with no sense of space or time. Just as quickly as the ground was ripped from beneath my feet, so it seemed that the huge mass of snow brought our journey to a halt. I was buried up to my neck in snow. My face was covered with pieces of ice. As if encased in concrete, about 300m down the slope. Unable to move. In shock. White. Whiter than the snow. The shock weighed heavy. I could sense nothing at all.

Our Sherpas, further down the slope, somehow managed to free themselves with what little remained of their strength. Then they made their way to me. They dug away at the snow until I could help myself. Then they moved on to help the next member of the party. “Quick, quick, get away!”, they urged us. The slope – weakened – threatened to give way at any moment.

My movements were mechanical, instinctive, hasty, powerless and confused. I did as I was told, unable to think for myself. I couldn’t believe my good fortune. I wasn’t even in a state to recognise how lucky I had been. Up and away was my maxim. But how, without strength and in shock?

The climb back up to our route, through chest deep snow, took two hours. My eyes were crusted with ice. I was almost happy that I couldn’t see. Empty, burnt out, I just wanted to be away from this slope. This ended at a gully where I had to abseil. Abseil quickly, as snow was increasingly falling from above me. A white guillotine with sheer power. I hung on the rope like a fish, dangling on an angler’s rod. As I clung to the rope, I felt rocks in the gully, but not the pain they caused as I banged into them. Again and again ice and snow would hit me from above, a never ending bombardment.

Further, down, away, quickly, out of the gully. 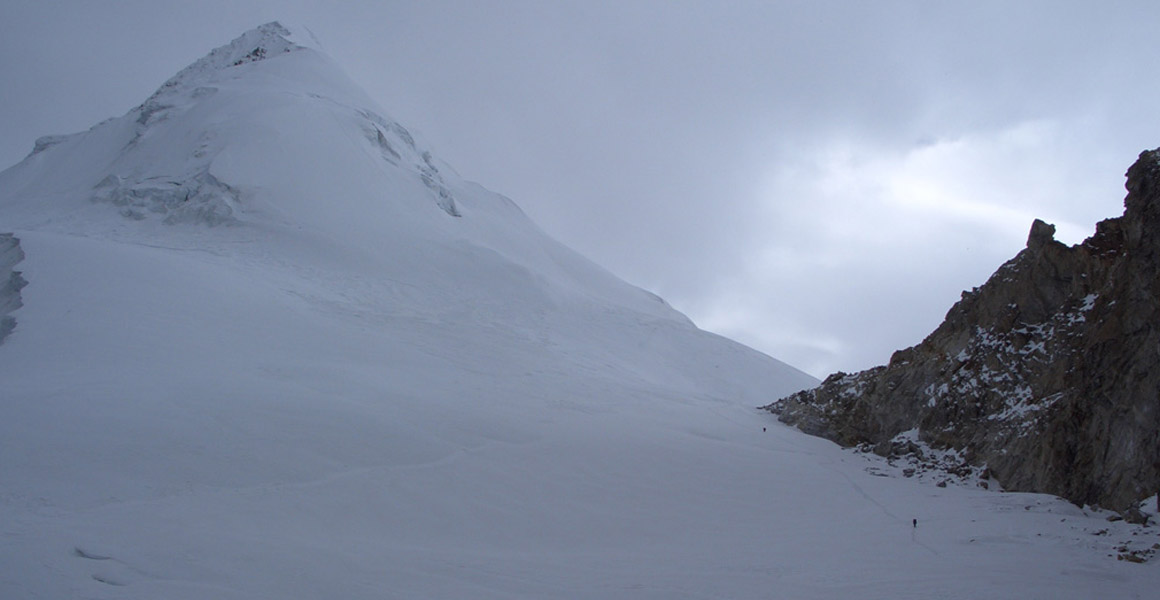